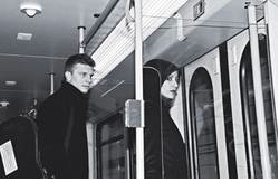 ,,V” (Roman number 5) is a poetic tale of love and its alluring paths in modern times. During his European Tour, Cliff Graym (37), a Jewish-American classical guitar player, discovers Feyrouz Franghi (29), a beautiful young Palestinian musician on a subway in Cologne, Germany. Cliff and Feyrouz are inspired into composing a new melody. Surprisingly and unintentionally they both come up with exactly the same tune, without knowing or having talked to each other. Cliff realises that this is a one in a billion stroke of fate, but unfortunately reacts too late. Before he gets the chance to speak to Feyrouz, she steps off the subway. At first it looks as if these two soul mates, shall never meet. But against all odds, Cliff decides to search for the young Palestinian woman, with only the mutual melody to succeed. Cliff’s love quest begins… Atmosphere: “V” was shot on black & white 35 mm film and solely devotes truly international languages, such as music, images and emotions, that are capable of crossing any religious, social or racial borders. (Source: IMDB / Kim Fatheuer)