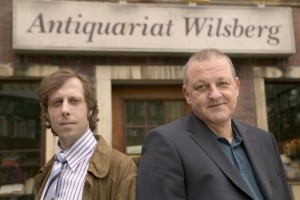 Wilsberg is one of the most successful and well-known German crime series (90-Minutes Episodes) on German Television. Since 1998, over 45 episodes have been aired on primetime Saturday 8.15 p.m. at public broadcaster ZDF.Wilsberg (Leonard Lansink), the owner of a second hand book store in small town Münster investigates murder cases as a private eye with unconventional methods and congeniality. Alongside with his friends Ekki (Oliver Korittke), a tax inspector, and Alex (Ina Paule Klink), a young lawyer, Wilsberg always gets in the way of Chief Inspector Anna Springer (Rita Russek).In a mixture of crime and comedy the audience can take part in solving a murder case, while having fun alongside characters closely related to their everyday life. Wilsberg’s formula for success are thrilling criminal cases and particularly unique characters.The 90-minute episodes of Wilsberg have an audience rating about 5,5-6,5 million viewers over all with a market share of 19-20%. Audience rating in the target group (14-49 years) is about 1.2 million viewers with an average market share of around 11%.